This method differs from summation because it focuses on current demand and supply for properties rather than the replacement cost of improvements.

To provide a reasonable estimate of the value of the property this  method relies on comparing the subject property with similar properties in the area. If there have been few sales in recent months in the area, it may be difficult to make close comparisons, although an experienced valuer will be aware of other areas with similar characteristics.

Where there have been several sales of similar properties in the area in recent months an estimate of the current market price can be made reasonably accurately, after adjusting for the upward or downward monthly trend in prices.

Information on real estate sales figures can be obtained at www.domain.com.au or several commercial databases as well as the relevant state government valuation department.

An example of the comparative value method is in Table below.

The subject property today, 30 June 20XX, is Apartment 603, 16–20 Sturdee Street, Riverdale. It is a two-bedroom apartment in a high-rise block within one kilometre of the CBD. In the past three months there have been two similar apartments sold in the same complex and five other similar apartments in the same street. All have been between the 5th and 9th floors and face north with views over the city.

Following is a table of recent sales of two-bedroom apartments in the area. 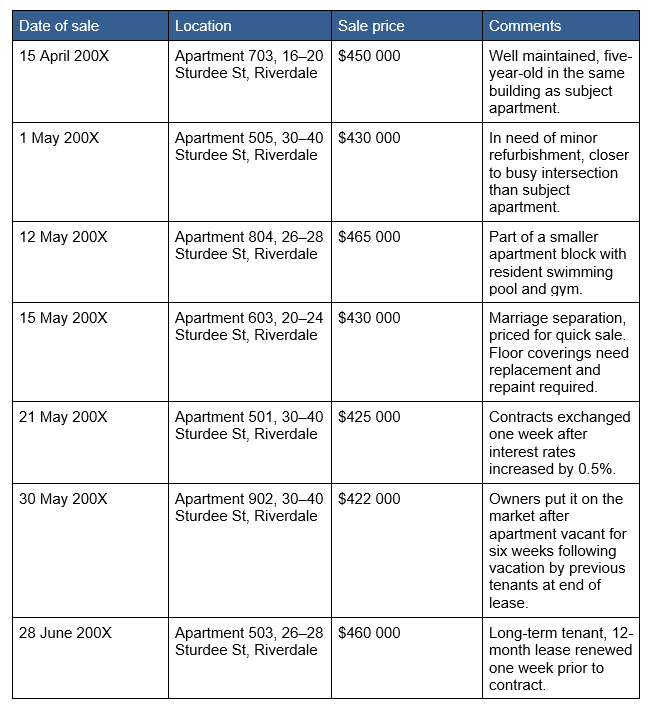 The comparison of recent sales indicates that similar apartments in the same complex are bringing a premium figure but are selling for less than those in the more boutique apartment complex at 26–28 Sturdee Street.

There is also an indication that there may be a softening of the rental market and that the recent 0.5 per cent increase in interest rates may have an impact on demand for apartments from investors, although only three comparative properties were contracted following the announcement.

By factoring in the impact on demand of the increased interest rates and the possible softening of the rental market (also reported by several other agents), the estimated value of the property is between $425 000 and $435 000.

Previous Topic
Back to Lesson
Next Topic
Login
Accessing this course requires a login. Please enter your credentials below!
Lost Your Password?