PIPA and CoreLogic reveal top performers after the GFC

PIPA and Corelogic provide an insight into housing markets by analysing housing data three years post-GFC to see how they recovered.

The Global Financial Crisis was a time of intense period of stress on global financial markets and resulted in a sequence of events that culminated in a near collapse of the banking system during 2007-2008.

New research from PIPA and CoreLogic has identified the best performing capital city and regional locations three years after the GFC.

The research and analysis is a joint initiative of the Property Investment Professionals of Australia (PIPA) and CoreLogic.

The CoreLogic research found that capital city dwelling values had increased by up to 39 per cent over the three years from the end of December 2008 – a time when Australia was emerging from the global economic crisis and government stimulus was ramping up.

PIPA Chairman Peter Koulizos said the capital city results showed a mix of inner and outer-city suburbs, with six of the top performers in Sydney.

“The dominance of Sydney in the results shows that nobody rings the bell to tell you when the upward swing of a property cycle has started,” said Mr Koulizos.

“When you do hear it, it’s too late because it’s already begun.

“I say this because most people believed that property prices in Sydney only started firming a year or so later – in 2012 – when it was already under way but perhaps masked by the continued economic uncertainty around the globe.”

Mr Koulizos said the individual capital city results were varied, depending on the location, with Melbourne’s best performers being inner areas, while Adelaide’s were those located in outer suburbs. 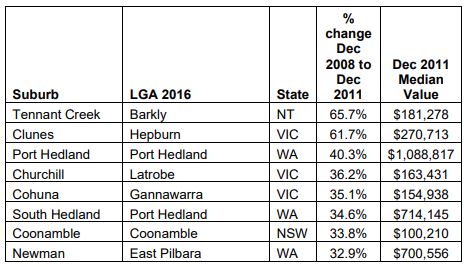 During that period of time, the number of first home buyers also hit historic highs, because of the Federal Government’s First Home Owner Boost, he said.

“The recovery in the property market was broad, varying from inner-city to outer-city suburbs,” said Mr Koulizos.

“Certainly, first home buyers helped by boosting demand for new properties, whether they were located in urban regeneration or greenfield sites.”

CoreLogic Head of Research Tim Lawless said dwelling values in regional areas increased by up to 65 per cent over the same period.

Mr Lawless said it was unsurprising that mining areas performed well given the resources sector was firing on all cylinders at the time.

“Areas such as mining towns, where economic conditions are dependent on a single industry, are much more likely to experience bursts of price rises or falls because of the strength or weakness of their dominant industries,” he said.

However, while prices are expected to stand firm over the medium-term this time around, the best performing locations may be very different to what has occurred in the past.

“The way that people work will likely change significantly post-pandemic and this will have an impact on less traditional property investment locations,” said Mr Koulizos.

“Lifestyles will undoubtedly change, which will make living outside the inner-city more appealing.